Rian
So... sum up "me" in a few words, yes? Hmmm..let's see. Things I love; family, cats, nature, writing, watercolor, working on the pottery wheel, coffee, chocolate, and Guiness. Things I don't like; people who complain (and have no better solution themselves), abuse (of anything), and most perfumes (give me a headache).

Neglected blog... but no neglected kiddies

Realized today that I've definitely neglected this blog in favor of "Older but better...?" where I tend to lump all my interests together since retirement. Cats and other critters still show up on that blog, but they are lumped in with cooking, pottery, quilting, etc.

Let's see if I can catch up here.  One of the last entries here on this site was about Rose, our then 22 year old cat. We had almost lost her at that time, but she had rallied. However, we did lose her in November of 2016 when she had a grand mal seizure. This story can be found here under the title, "In Memory of Rose". 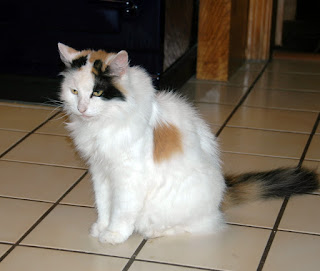 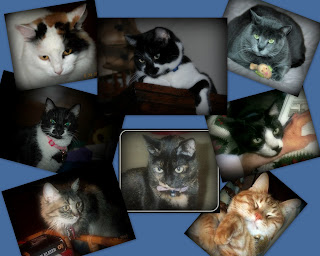 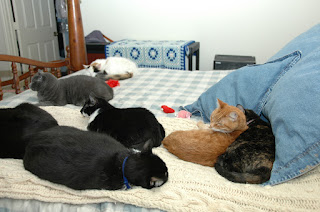 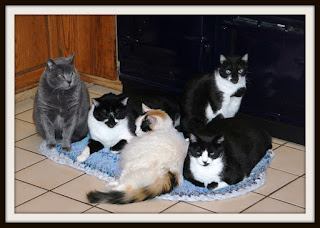 Since then the cat population in our house-hold has remained at 3. Tux and his sister, Julie, are both 14. Ghost is 10. We are determined to remain at this number - and even at this rate, there is a chance that these 3 will outlive us. But it is a difficult task to remain at 3 when so many cats and kittens need homes.

The feral cats outside come and go, but some seem to make this their permanent sanctuary - which is fine with us. Pretty Boy - who is a long haired black - has taken over the front porch and grounds. Although he may roam the neighborhood on some days, mostly he can be found sleeping in his basket on the porch or lying on one of the outside windowsills.

In the back we have a half grown kitten that is constantly trying his best to be friends with one of the grown cats (Square Ear). Square Ear is a loner who has had part of one ear bitten off and although he isn't aggressive to the kitten, mostly shrugs him off.

And so life goes on and the feral cats, box turtles, raccoons, possums, and occasional coyote or bobcat come and go, we watch with amusement at their antics and are glad to provide a place with water, food, and sanctuary as the need arises.

I've often told DH that we should have started a genetics log when we first moved in as we have been here for 32 years and have watched generations of feral cats (as well as other species) come and go. The 8 cats that did come inside to share our lives were either rescues or ferals... and have always made loving additions to our family.

You know, it's hard to ever be upset about kittens showing up in your yard. They are so darn cute! But of course when one tries to keep down the general feral population, it's a bit upsetting when all of a sudden the mamas show up with 2-5 kittens each.

When DH and I were younger, we'd try to catch the kittens born in our yard when they were at a catchable age (3-4 weeks). At this age, they wobbly-walked and couldn't run too fast (3 of the cats we have inside now were caught like this about 12 years ago).

Over the years we've continued to take the kittens we could catch to the adoption room at our nearby shelter and this way they were adopted and no longer on the streets. And when we could catch the mama, we'd have her spayed, vaccinated, and returned to the street.

Now that we are older, the feral mamas seem to have caught on, as they now have their babies in another yard, but continue to bring them to our yard after they are about 6 weeks old... definitely too old to catch... fast little buggers! But they are adorable.

At the moment, we have 3 mamas with their kittens. Backyard mama has 4, Sideyard mama has 5, and front yard mama that just showed up yesterday has 2.

It's hard to know what to do. We certainly can't catch them. And if we call "Animal Control", they will set out hav-a-hart traps and catch raccoons, possums, and skunks (have done this before)... but no kittens.

What probably will happen is that some will stay and some will go off with their mama on what we call "walk-abouts" and not come back. They have 'moved on'.  The ones that hang around will eventually go off on their own as they become adults.

And even some of these return years later on occasion to come by and spend a night or two in the yard. It's always comforting to see one of the ones that were kittens here return later as an adult. Good to know that they survived and have not forgotten where they spent some of their kitten days.

An update on Rose


I've mentioned before that Rose is now 22... and thinner, weaker, and more mellow than she was at a younger age. We almost lost her about 6-8 weeks ago. But she has rallied like a trooper... and is almost acting like her old self again (which is feisty!).

She has done so well that this past week we decided to bite the bullet and take her to the Vet to have some mats shaved off. At her age, she is not so meticulous about her grooming... and has mats around her rear. We have tried everything at home to remove them ourselves (even buying different types of de-matting razors) but she will have none of it. And we didn't think she could handle being anesthetized (which they have had to do in the past to get the job done).

So... after talking to the Vet and the Tech, they decided to muzzle her and try to do it without anesthesia. I was also afraid that if she got too upset, it would cause her heart to give out, but they promised me that if she showed any signs of mouth breathing, they would immediately stop.

Well, they did get it done! But she was definitely NOT a happy camper. You could hear her protests all over the Veterinary clinic... and she can be LOUD!  But no one got bit,  the job was done ... and best of all, she survived the ordeal!

She is home now and has actually resumed her grooming as we keep finding little tuffs of white hair everywhere. So we're guessing that she is feeling better and doing her best not to have to ever go through that again.

Here's the Brownie Bark Recipe I mentioned in my previous post: 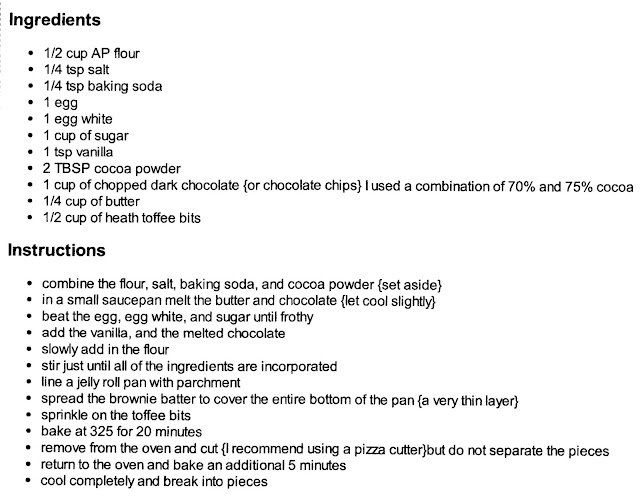 It occurred to me recently that I've ignored this site to write mostly on my "Older but better" site. Well, I decided to post some pics here that relate more to just Cats, Coffee, and Chocolate. This is a picture of Tux as he likes to sit with his head resting on the end table... 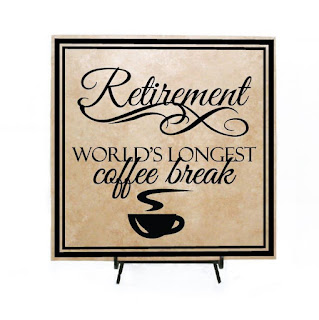 What a good way to think about retirement! 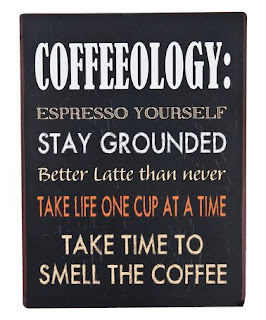 What would we do without coffee? I would have the world's worst headache. The few times I've had to stop drinking coffee, I get that 'lack of caffeine' headache. I know that caffeine is basically a drug... one that we become addicted to at a young age. But if coffee actually bad for you? From what I've read, no. In fact it seems that the consensus of medical opinions is that 1-2 cups of coffee a day is actually good for you. I sure hope so.


And this Brownie Bark is my newest chocolate craze!  It's an easy recipe and definitely delicious and addictive...

With cats, coffee, and chocolate in mind -

This is the story of 4 kitties... 4 little black ferals.  The first one lives in the backyard with his skinny mama. He is the one outside survivor of a litter of 6. DH and I took the others to the Adoption Room at our local Animal Shelter. We left this one (the runt) with his mama. We originally called him Termite, but now call him Skita as he's no bigger than a mosquito... and although about 3 months old... is still tiny and somewhat shaky when he walks. DH and I don't think he'll ever be normal, but we're giving him a chance. His mama watches him very closely and is never far away.

Having an AMT background, I've done a little research and believe that he may have a mild case of Cerebellar Hypoplasia, which is a bit similar to Cerebral Palsy in humans.His walk is shaky, his head bobs, and he occasionally falls over. Otherwise, he eats, sleeps, and plays like any other kitten.

There's another half grown female in the yard who's mother and sibling took off and left her when she was about 6 weeks old. She has attached herself to skinny mama and Skita... and acts like an adopted older sister keeping an eye on Skita when skinny mama isn't around. DH and I call her Aunt Polly.

Then there's another black mama who showed up with 2 little black kittens about 6-7 weeks old. We call them 'the twins'. One is always running around the back yard on his own. The other sticks close to his mama and seems to be afraid of his own shadow.

And then.... there's "the wanderer" in the side yard. He's a little ball of black fluff. His mama leaves him a lot and he never stays where she left him. He wanders about and cries. But he's very brave and has no fear of other cats.

Occasionally all 4 kittens are in the back at the same time and will play together. Today was one of those days. I tried to use my iPhone and get a video of them playing. In it if you look closely, you can see how shaky Skita is.  It starts off with Skita...


We have a very small feral kitten that lives with his mom in our back yard. We call her "skinny mama" as she is very thin... although she eats well. She is also an excellent mama and takes very good care of this kitten... who is also very small for his/her age. We think he or she is about 8 weeks.

Anyway, I was washing dishes at the sink and happened to look out the window. Termite (tiny kitten) was sneaking up on a good sized box turtle that was eating from the cat food bowls. I immediately grabbed my camera and shot a few pics. 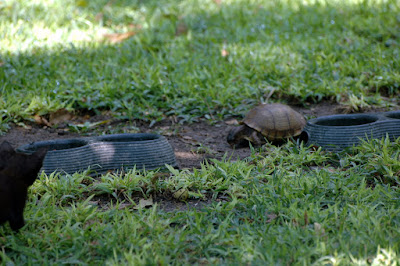 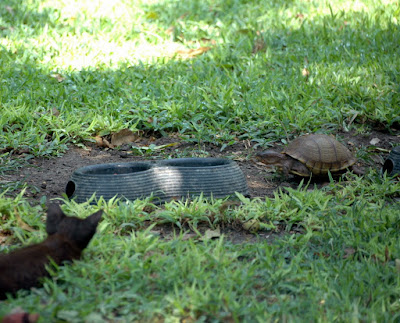 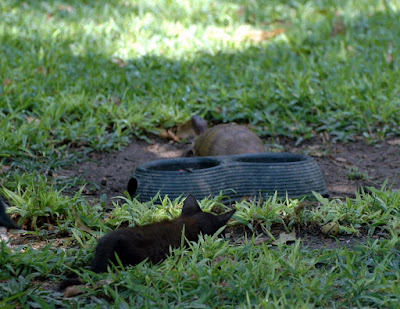 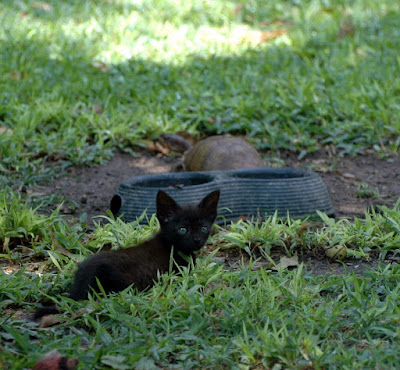 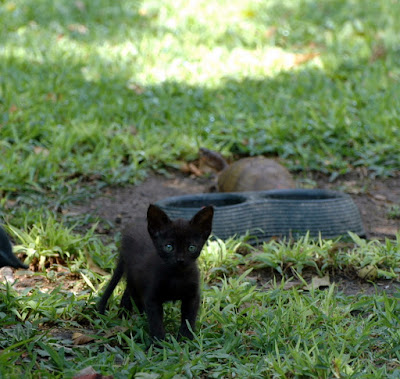 As you can see, Termite was hiding in the grass as the turtle approached. However, in the last 2 shots, he heard my camera and turned to look...